Sunday 13th October 2019 saw the very last public tour of 55 Broadway.  The Grade I listed building that has stood as an iconic creation of the London Underground system and headquarters of the city’s public transport for nearly ninety years is about to start a new journey after being sold to developers.

A combination of features makes this building special – not just its large scale – as it was most often referred to as London’s first skyscraper, but its beautiful interiors, controversial sculptures and technical innovations. 55 Broadway  was the tallest office building in the capital when completed in 1929, only exceeded by St Pauls Cathedral in height. The design was a master work from architect Charles Holden, fed by the vision of Lord Ashfield and Frank Pick.  Lord Ashfield, formerly Albert Stanley, was Chairman of the Board and Frank Pick the Managing Director of the Underground Electric Railways Company of London(UERL), and together with Holden they instigated the cutting-edge design that the London underground system became synonymous with.

Holden was first commissioned by Pick in 1923 to design a facade for a side entrance at Westminster Underground station. Further stations followed, and in 1926 he began work on a new headquarters above St Jame’s Park station at 55 Broadway.  Holden came up with the structural design of a cross as the weight of the building needed to be distributed evenly over the station. This design was usually reserved for religious buildings and was therefore an unconventional shape for a secular building.  The fourteen-storey structure is steel framed, which enabled it to grow upwards in size rather than outwards.  Seven hundred reinforced concrete piles underpin the building to an average depth of 12 metres below the basement level, across the railway tracks and platforms of St James’s Park station below.

Officially opened on December 1st 1929, the 14 storey 53 meter high structure was a marvel, earning Holden the RIBA London Architecture Medal in 1931. It was the vision of the trio to create a building that was both functional by employing the latest technology, and to incorporate luxury befitting such a high-ranking establishment.

The two thousand cubic metres of unpolished Portland stone that clad the exterior give the structure an air of grandeur whilst numerous “setbacks” were incorporated into the design, allowing light to reach the pavement below and to penetrate the large open plan offices. 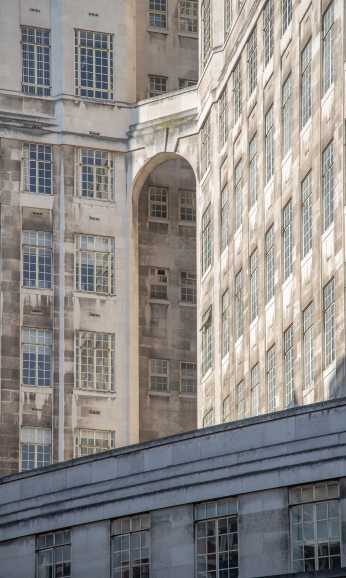 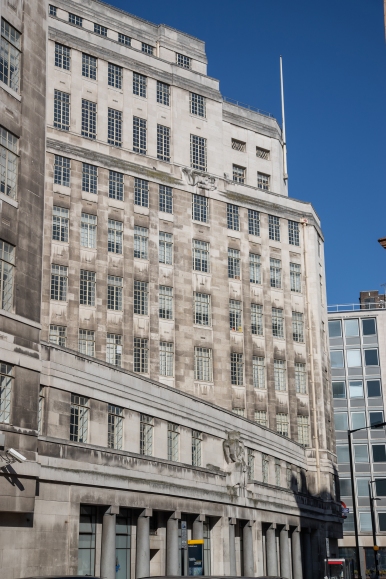 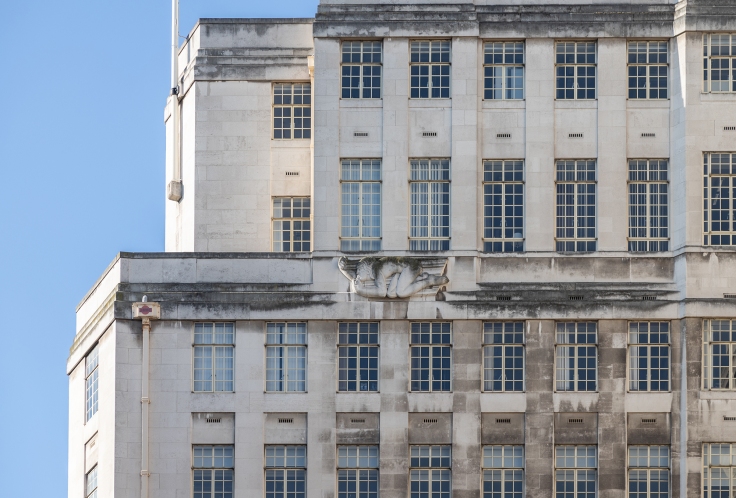 No expense was spared on the construction of UERL’s corporate HQ , starting in 1927; it was intended to project prestige.  The Portland stone exterior made it comparable with other great bastions like Buckingham Palace and the National Gallery at Trafalgar Square.  However, the exterior sculptures and bas-reliefs were a cause for controversy. Charles Holden commissioned seven of Britain’s leading avant-garde artists to create ten designs across the building.  Jacob Epstein carved the two main pieces titled Night and Day.  The other eight sculptures, carved into the 6th floor’s exterior, took inspiration from the four directional winds: two each for north, by Eric Gill and Alfred Gerrard;  south by Gill and Eric Aumonier; east by Allan Wyon and Gill again; and west by Henry Moore, Samuel Rabinovitch.  It is Day that caused the most complaints from the public, who regarded it as indecent.  The young boy figure was accused of being over endowed and when it rained the falling water just happened to stream from a specific region!  After much bad press and public outcry, the sculpture was modified with smaller proportions.  The naked figures of the Winds series were also scorned; however Holden and several others involved in the project offered to resign if any further alterations were made.

Groundfloor level is accessible to the public via three travertine marble-clad and paved arcades. Originally these allowed open access to the central lobby of the building, though the layout was reconfigured in the late 1980s to allow this to be closed off. Many ornamental decorative details were also fabricated during this period to complement original surviving fixtures. These include some bronze up-lighters and the central polygonal desk in the foyer. 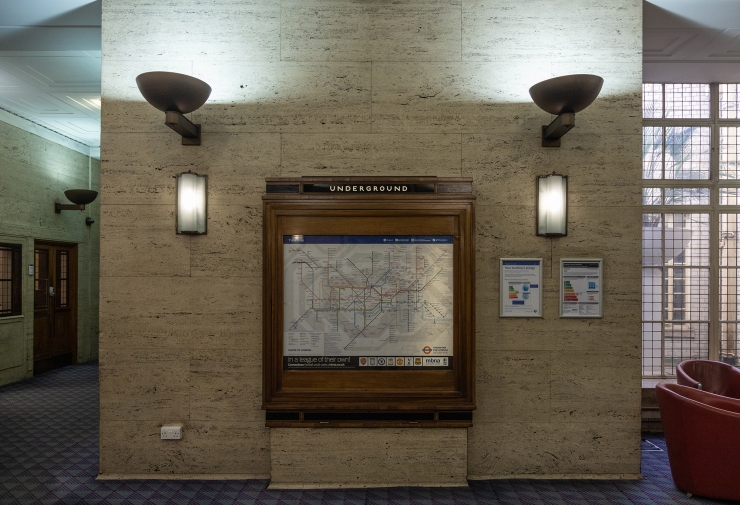 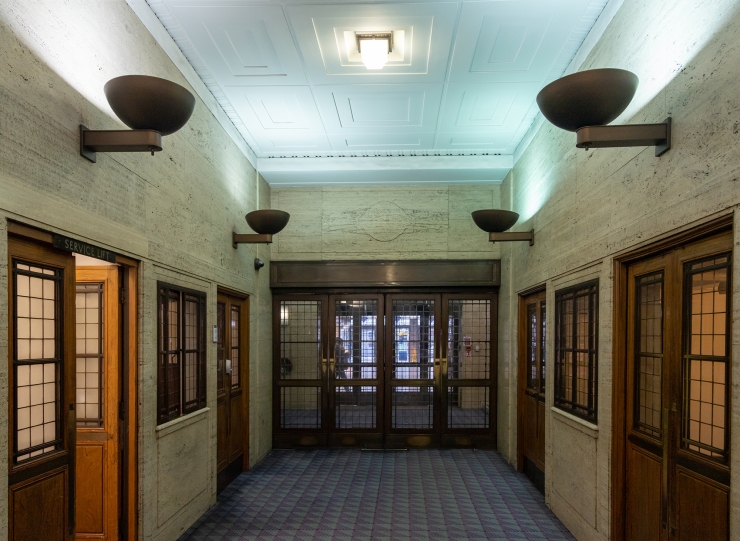 The large foyer is also home to four electric lifts with decorative brass fittings and doors made of bronze, enamel, glass and walnut.  The highest quality walnut panelling also adorns the walls; and unpolished travertine marble cover the floors and main lobbies within the building.

This area was also proudly home to one example of the cutting edge technology installed when built: train interval indicators – a series of six large dials displaying live readouts of the service on the network. 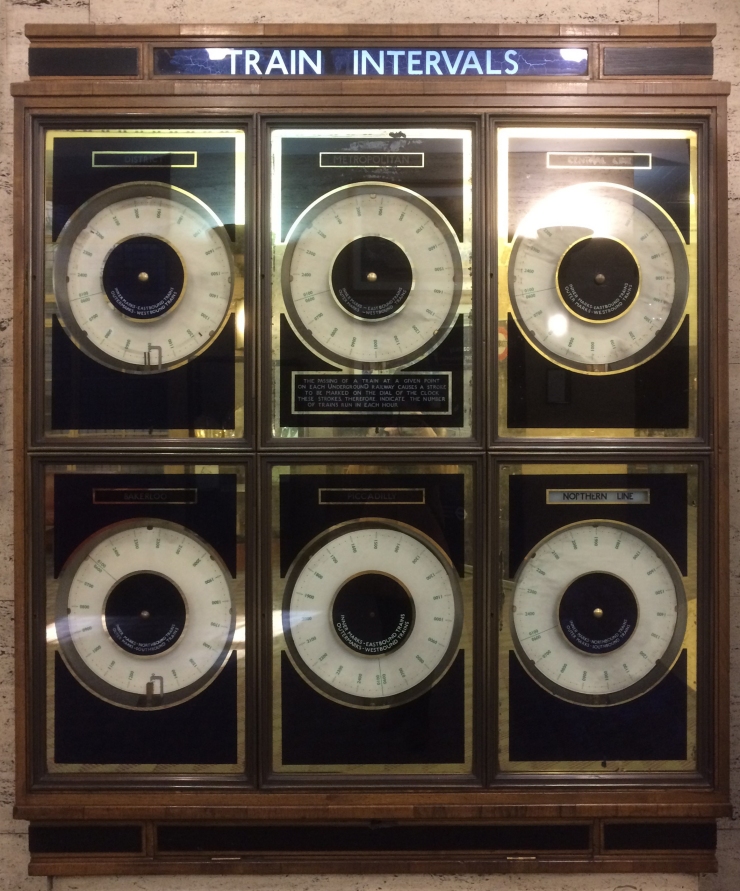 On first inspection, many of the upper floors appear to be a duplicates of each other, though this is not the case.  The higher the level, the grander the lobby that greets you when disembarking  the lifts, a subtle but important touch.  The directors’ and chairman’s floor are as to be expected, the grandest.  Each director had his own bathroom; complete with bath (sadly no longer in situ). Their offices have a fireplace as, although this was a centrally heated building, 55 Broadway was renowned for being incredibly thermally inefficient.  Each director had his secretary in her own adjoining office.  The chairman, Lord Ashfield, had his own balcony and not one, but two secretaries, each with her own office.  The status of the visitor determined which secretary they saw and the waiting time until they entered the grandest office.  As this building was extremely hierarchical and of its time, the directors had their own dining club on the tenth floor, along with their own designated lavatories on each floor, should they not make it to the upper floors in time!

The tenth floor which is the highest level served by lifts, was reserved for executive dining and the eleventh floor was used for technical facilities.  We find that the twelfth and thirteenth levels were combined to house the clock maintenance and no floor was ever designated as the thirteenth level.  It is the accessible fourteenth floor that offers stunning views of London. 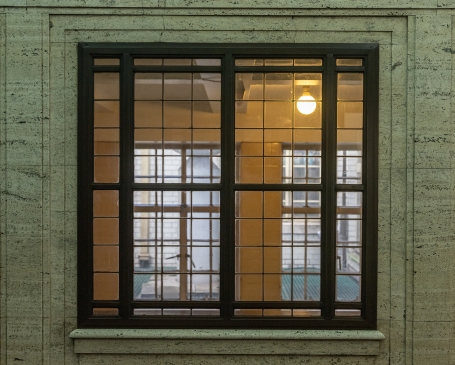 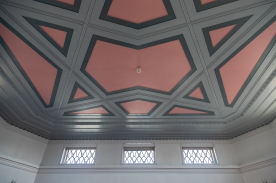 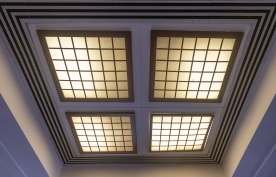 TFL moves on and out

Drastic changes within the London Transport establishment took hold during the late 1970s and a major cost cutting exercise saw the end of executive privileges.  The suites on the upper floors were converted into meeting spaces accessible to all employees.  It was in 2000 that Transport for London (TfL) replaced London Transport and inherited 55 Broadway as its headquarters; and soon started looking at the disposal of this ageing twentieth-century relic.  The remaining offices within the building were cleared out as they were deemed unfit for purpose in the twenty first century. This wonderful building full of stories to tell is now embarking on a new journey under the tenureship of property investor Integrity International Group. To date, formal plans have not been announced, but planning permission exists to convert the space into luxury flats. However it is understood the new owner could look at different options. Thankfully the Grade I listed status held by 55 provides us with some assurance that the interior will not be overly compromised.

I would like to thank Hidden London for such an excellent tour of 55 Broadway and the knowledgeable tour guides who had between them previously worked for TfL for over thirty-five years, including time at 55 Broadway.