The inter-war years were a hugely fertile, and greatly celebrated golden period for design. From automobiles to fashion, sculpture to graphic design, interior furnishings to the architecture that housed them, no part of the visual creative world was left untouched by what is now often referred to as the Art Deco era. Known in period by a myriad of terms like jazz modern or machine age, it is often cited as being the first style or trend that reached out and left an indelible mark on all aspects of design.

Being more specific about exactly what Art Deco is, can be rather problematic though. Emerging from a buoyant arts scene in Europe, Deco was infused with a multitude of contrasting elements. Ancient Egypt, mechanised production, minimalism, tribal art, C20th innovation, safari, the Far East, modern art, all infused into an amalgamation that is impossible to pin down, save for the one consistent undercurrent; an optimism and desire to shrug off the immediate past, forget the flamboyant tastes of the previous century, and embrace a whole new world of exciting possibilities that presented themselves.

Though its origins can be traced to before the First World War, the style reached its pinnacle in the late 1920s following the 1925 International Exhibition of Modern Decorative and Industrial Arts was a World’s fair held in Paris. This legendary event was organised by the Société des Artistes Décorateurs (The Society of Decorative Artists) and gave a grand platform for international architects, designers, engineers and artists to showcase their pioneering designs to the World. 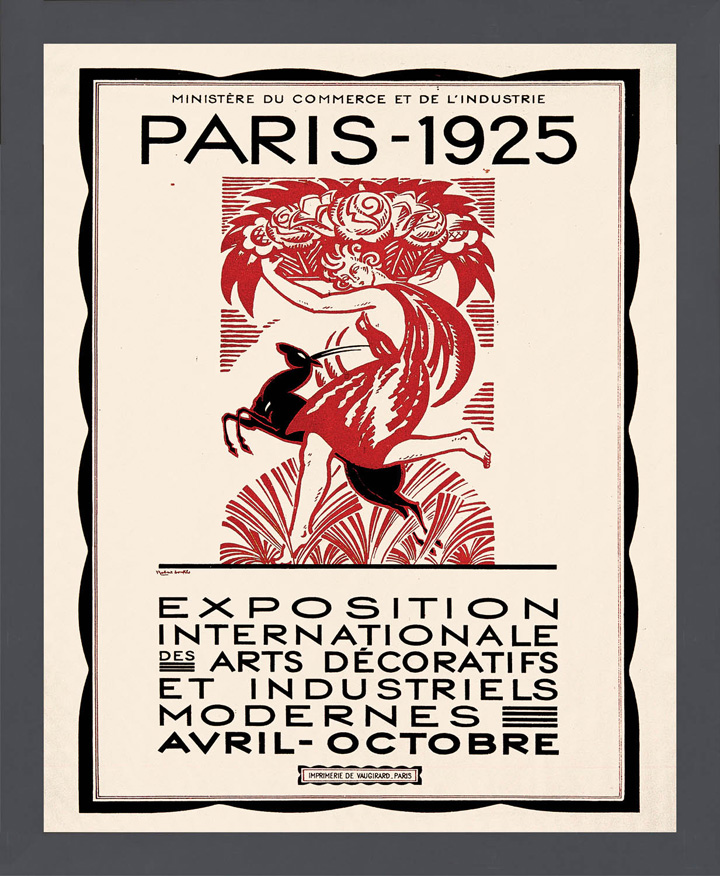 The term ‘Artistes Décorateurs’ was later abbreviated to Art Deco and adopted by the art historian and Critic Bevis Hillier. It had been used in a newspaper article a few years earlier and he thought that it encapsulated the time perfectly and flowed well with the other named movements that of Art Nouveau and Arts & Crafts.

Popularity spread globally and affected all forms of art from architecture, interior design, sculpture, furniture, industrial design and visual arts such as fashion, clothing, jewellery, paintings, graphic arts and film. This movement combined and was influenced by many different styles and movements such as cubism, neoclassical, and futurism.

From a consumer perspective, it became a fashion that one could wrap oneself in, transforming your whole lifestyle to represent a single co-ordinated vision of modernity. It was not just for the well healed and elite though. By the 1930s, mass production meant that everyone could live in modern style. The Art Deco interior style is a streamlined and geometrical which often includes furniture pieces with curved fronts, mirrors, clean lines, chrome hardware, and glass.

Today this seemingly timeless period of design is still hugely popular. We at the Art Deco Society UK look forward to bringing together likeminded enthusiasts of the style together together to both celebrate, investigate and educate others about this beautiful period in design.